This story is republished from Resy.com.

“I am Ivan Vasquez, and I am indigenous Oaxacan by birth, and restaurateur and owner of Madre Restaurant by trade. I have called Los Angeles my home since I was 15 years old, and consider myself a true Oaxacalifornian,” began an Instagram post not too long ago.

Vasquez, owner of three outposts of Madre — one in Palms; another in Torrance; and a newer, larger location along the Fairfax corridor — took umbrage with a “very famous chef,” who isn’t of Mexican descent, offering a multi-course Oaxacan dinner. In response, Vasquez offered his own monthly tasting menu: dishes like rajas con queso with black winter truffles, barbacoa de borrego from Central Valles, frijoles de la olla with pork and chiles de agua, plus a flight of mezcal.

“I am here to bring you a taste of my culture, a food that is deep with soul from the people who cook it, and the family recipes it was passed from,” he added. “We are more than some chiles and spices on a molcajete, we are a people with a passion. While we have witnessed our cuisine undergo a renaissance throughout the city, we have also witnessed certain appropriations.”

Vasquez was born and raised in Oaxaca de Juárez, and if he gets his wish, someday he’ll die there, too. Until then, the owner of the Madre restaurant empire stays faithful to his role as a cultural and culinary ambassador for his beloved birthplace, and celebrates his Oaxacan heritage via a blend of tradition and style that feels entirely L.A.

The Madre restaurants serve as a haven for people who love the region or who, like him, call it home. They’re also a place for anyone just looking to sip an obscure mezcal in a trendy, very L.A. setting. Oaxacalifornian to a tee.

Vasquez doesn’t see himself as a trailblazer for this particular cuisine in the city. Los Angeles already is one of the mightiest pillars in the city’s Mexican food pantheon. We have pioneers like Guelaguetza, Poncho’s Tlayudas, and Rocio Camacho, the town’s revered and James Beard-nominated “mole queen.” Plus countless diners, bakeries, and numerous family-run spots that cater to neighborhoods all over the city.

He just wants to add a bit more sizzle.

But perhaps not in a way as flashy as, say, Broken Spanish, Mírame in Beverly Hills, or Damian, all of which have helped make L.A. an epicenter of modern Mexican-inspired dining. Vasquez wants his places to fit comfortably in the middle — neighborhood spots bursting with energy but filled with Oaxacan soul. A vibe that’s less mom-and-pop comfort and more millennial cool, a rare regional specialist that aces stylish interiors, a stellar bar program, and authentic dishes.

“I want Madre to represent both L.A. and Oaxaca at their best,” he says, “without breaking our traditions and recipes.” 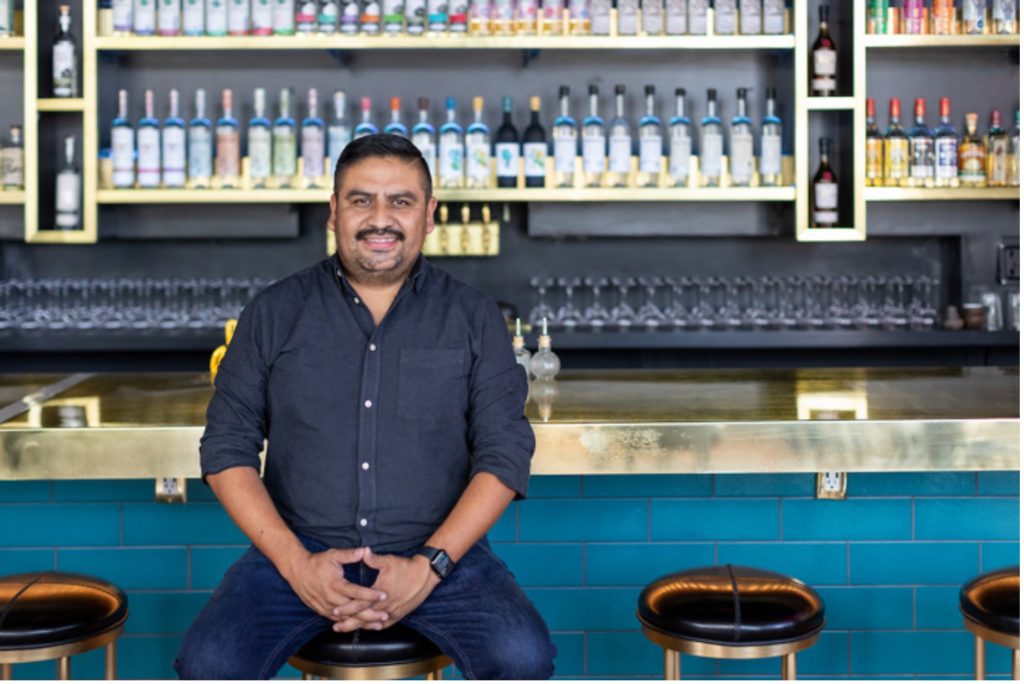 Vasquez left Mexico for California as a teenager, eventually landing an entry-level job at an outpost of the fast-casual Baja Fresh chain. This would prove formative. He was steeped in the ins and outs of restaurant operations, from managing supplies to financials. But 15 years later, as a regional manager, opening numerous new locations, he became frustrated watching franchisee decisions lead to store closings, and witnessed the decline of a brand he’d once felt passionate about.

“I started feeling like the corporate world didn’t thrill me anymore,” Vasquez says. “So I started looking for my own small restaurant.”

He took over a 30-year-old Mexican restaurant in the Palms neighborhood in 2012 but wanted to change the concept into something far more personal. For Madre, he wanted to offer molotes, memelas, and tasajo-topped tlayudas, dishes similar to other Oaxacan restaurants around town. But he wanted to go even further. Thanks to the existing design and setup of the Fairfax location, plus the buzzing WeHo neighborhood around it, he had the opportunity.

There the menu features things like tender lamb barbacoa, wrapped in maguey leaves and slow-cooked for four-and-a-half hours, which hew closely to what you’d find at the legendary Tlacolula de Matamoros market. The salsa “madre” contains seven varieties of chiles, requiring as much commitment to sourcing as it does to culinary know-how. And the super unique mole palenquero, a deeply complex sauce made with the fruits and agave leftover from the production of special occasion pechuga mezcal. Vasquez invented it himself while watching a mezcalero friend distilling this rare spirit, which is primarily produced for holidays and celebrations

With a nod to Oaxaca’s long coast, seafood is another highlight, things like spicy oysters a la diabla, and oysters topped with ceviche de chapulin (grasshoppers). Also vital to the Fairfax location is a wood-fired stove retained from the previous pizzeria, as well as a charcoal grill, which allows Madre’s chefs to prepare meats like cecina and chorizo using the same kind of fuel that fires comals and grills in Oaxaca’s humming markets, mountain communities, and rural roadside restaurants.

The food is a draw, but the mezcal-centered bar program is really what makes Madre stand out. With over 400 types of mezcal among its collection of agave distillates, Vasquez claims to have the largest selection in the U.S., reflecting his obsession with the spirit. His close relationships with distillers allow him to score exclusive rarities, such as Amormata del Castillo’s pulque-fermented mezcal from Nuevo León, and Rezpiral’s tepeztate and mexicano ensamble. 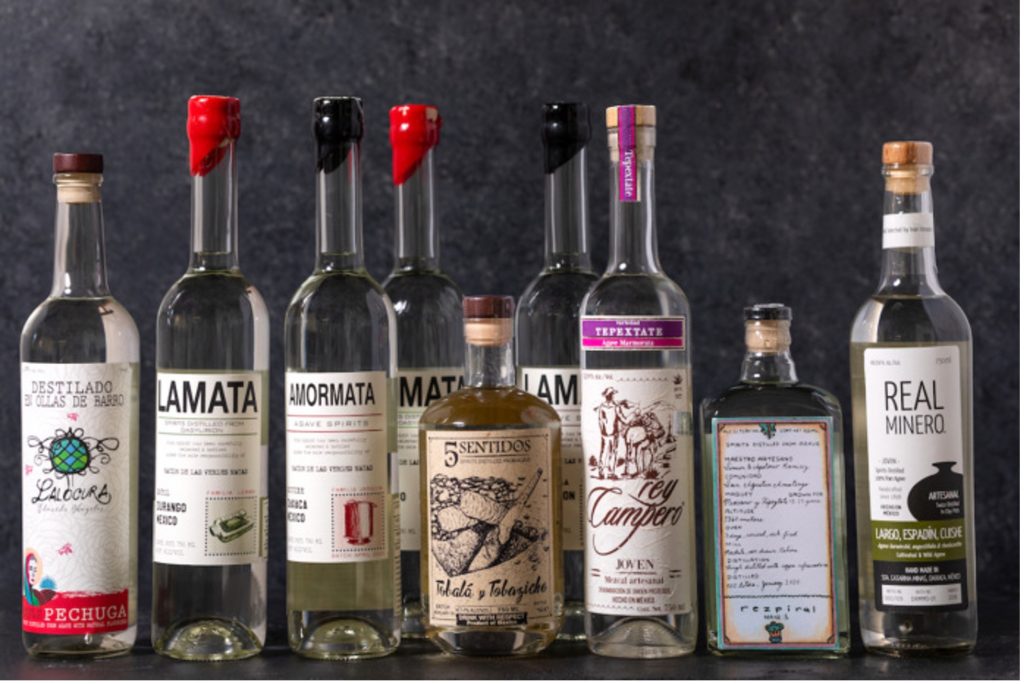 The many mezcals from Vasquez’s well-curated list. (Photo courtesy of Madre)

Like many mezcal champions, Vasquez finds the spirit’s newfound popularity somewhat precarious. Forthcoming designation laws may cut agave distillers from specific regions out of desirable classifications that support their labor. In essence: He doesn’t want mezcal to end up like Tequila.

“It’s exciting, as long as it’s in good hands,” he says. At the same time, “the commercialization of mezcal and how we support the next generation of mezcaleros are my biggest concerns. Mezcaleros have been fighting for this spirit, which was prohibited in the 1800’s, for generations. Distilling is a cultural form of resistance against colonization.”

When he opened the first Madre, he realized people clamored to sit at the bar to chat with him about mezcal and Tequila. Now you can reserve private tastings to explore some of his favorite and newest offerings in his private collection.

“My purpose is to introduce people to the right way to drink mezcal by sipping it, and tailoring mezcales to people’s experience levels,” he adds. 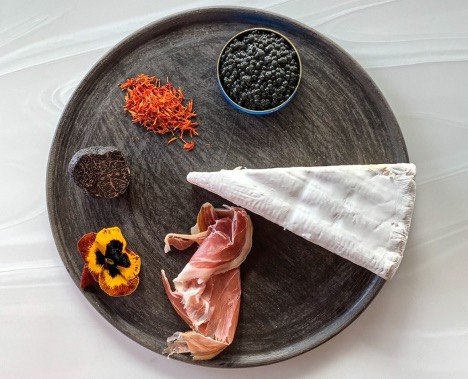 From a recent tasting menu. (Photo courtesy of Madre)

While establishing new COVID-ready routines at his existing locations in Palms and Torrance, opening Madre on Fairfax was the riskiest venture, mostly because it happened during the height of the pandemic. He first debuted a takeout window in July 2020, and then a patio by the fall. The restaurant is finally serving its full menu, with some indoor dining plus outdoor seating available. Now everyone can see his curated touches, like the handmade devil masks from La Mixteca-based craftsman Arturo Bella, or stunning ceramics from pottery maker La Chicharra. He’s still waiting to open a speakeasy secreted into the restaurant’s side for mezcal tastings, but that will come soon enough.

“Everybody told me I’m crazy to expand,” he says. “But I do this less for money than personal satisfaction. It’s really an excuse to start a conversation about culture.”

As for the future, the one before his desired retirement back in Oaxaca, Vasquez still sees room to grow. Plans are brewing for a fourth location somewhere outside of L.A., perhaps in San Diego. He might even entertain hatching a new concept. Whatever it might be, you can always count on two things where Vasquez is concerned.

“It’s always going to be married to Oaxaca,” he says, “and mezcal tradicional.”

As part of the American Express® family, Resy powers the world’s best restaurants and helps connect diners with the restaurants they love through its best-in-class reservations technology, insider content, and exclusive access and experiences.

To read more about your local restaurant scene, visit resy.com

Resy: Pandemic Pop-Ups Are Changing How We Dine – For the Better

Five Things to Watch in the Restaurant World in 2021

Why Takeout Matters Now More Than Ever

Putting Clients on the Pathway to Reduced Carbon Emissions

Powering Progress Through Travel – This Is Our Why